Reagan had a sleepy day today. She was out cold most of the day. She did wake up this morning and seemed pretty alert, with big wide eyes and acting a little spunky, but then she dozed off just before PT and was OUT. PT went ahead and took advantage of her relaxed state and did some good stretching on those tight legs. OT, who was supposed to come right after, decided she didn't need two sleepy sessions of stretching. Reagan kept sleeping, even through diaper changes and a full outfit change, and continued to sleep as we loaded her into the car for her 6month neurology appt. Funny thing is, her neurologist said she was having a sleepy day the day of her last neuro appt! What are the odds. She slept through the entire appt as well as the blood draw that followed! During the appt we spoke with her doctor about our concerns with the "episodes" she has, the ones we usually see at night as she's falling asleep. We aren't seeing them as much lately, definitely more subtle, but they are there. The head turn and the eyes fixed and looking down in the same direction...he said definitely sounds seizure-ish...but unless they actually catch an episode on the EEG, there's no way to prove or disprove whether it's a seizure. We also discussed the idea of treating it. Changing her meds could definitely cause an increase in other seizure types...ones that are more severe...ones we really don't ever want to see again. So for now, we are just going to continue to keep an eye on her and not make any changes. We also spoke to him about our concerns that her increased hormone levels/puberty may be responsible for some of this and he suggested that maybe she see a different group/doctor to manage that. (Her current endocrinologist is of the wait and see/do nothing mentality.) He did order some labs to check her blood levels of Banzel (the seizure med she's been on for 5+ years) as well as her regular EPI-743 labs for the Stanford study. Glad we got that out of the way...and she never opened her eye once! We drove home and then carried her back upstairs where she just continued to snooze! She did wake up for a bit tonight but she was pretty calm and laid back and eventually just dozed right back off. Sleepy girl! 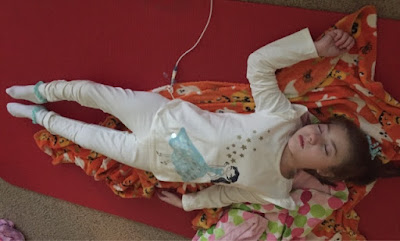 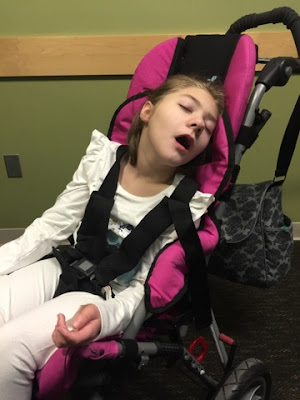