Reagan has had a pretty good day today! She slept through the night and woke up this morning feeling noticeably better! Gone are the temperature regulation issues (they always seem to disappear when she has a good sleep) and crying/sensitivity from the days before. She's been a little vocal today, but vocal good. Never any indication of fussiness. She's been super sweet and smiley all day today. She had a good session with her PT and even tolerated her AFOs and stander better than in previous days, although her AFOs still made her feet really red (even after just a short 10min or so). She did some great work sitting with her OT (she said it's the most she's tolerated in a while). She did get a little over excited when she tried to work with her on her iPad (even without the noise), but they just did something else instead. We are going to miss her OT as she's taking a long trip to Thailand/Japan and we won't see her again until the end of the month! Then shortly thereafter she had school/speech. She did pretty well with that too, her teacher said she had a great session, although they were on their best behavior and warned to not do anything that might overexcite our vocal girl! At the end, she dozed off! I really thought she was just playing possum, but when I took her out of her chair and laid her down, she stayed asleep! Poor girl! She's such a cutie though! She didn't sleep long though and woke up to a huge poo...her second (on her own) of the day! Gotta feel good to get that out! Hoping for another great day tomorrow!! 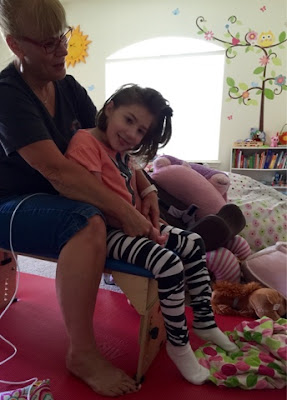 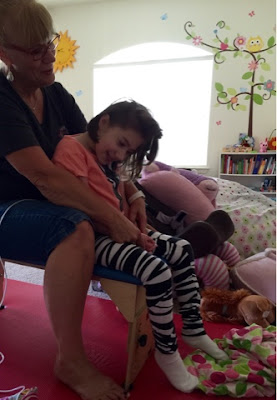 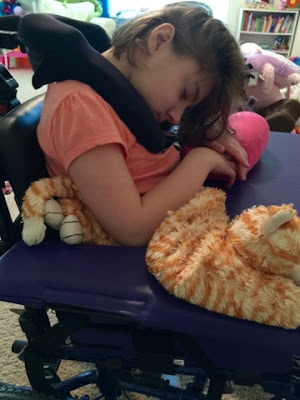