Reagan slept well last night, maybe we all slept a little too well, because I didn't wake up when my 3am alarm went off to change her over to pedialyte! I woke at 6:30am and after saying A LOT of cuss words, I finally switched her from formula to pedialyte (for her HIDA scan). I couldn't get a hold of anyone til 8:30, but they thankfully were able to push it back to 12:30pm! I was really relieved because I could tell it was going to be another sleepy day (which would be the perfect day to do this sort of procedure)! Reagan slept the whole way there and even through the FIRST iv attempt! Ugh. For the second, they got a nurse from the PICU who used ultrasound to find a vein and that one was a piece of cake (but she did wake up for that one)! She was good though and she stayed awake during the first half of her scan! I almost wish she would have been asleep during this part because it was pretty claustrophobic and she kept trying to crunch up and bumping her head on the machine! She was good though but she did seem to get a little nauseous during the last half of the procedure where they inject the stuff to make the gallbladder contract! Her tongue action definitely picked up but thankfully she fell asleep for the last 20min and then slept the whole way home and kept sleeping til about 7pm last night! She was awake til 11:15 or so but went back to sleep with the help of clonidine! Such a good girl! Glad to have this test out of the way (and even better to have it on a sleepy day)! 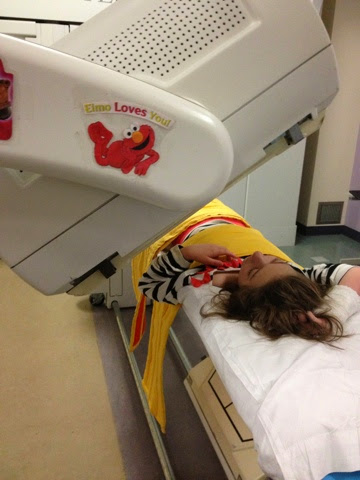 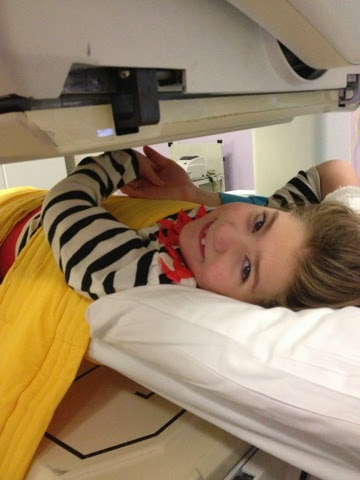 could be the gallbladder. That nausea hits and disappears after a few and you finish the test. Not that I am wishing a dysfunctional gallbladder on her, but if that is what is going on it is something they can fix and hopefully get rid of the bad days! Fingers crossed this explains those bad days. Compared to a lot of other things it is a little more straightforward to fix. Hugs!