Reagan slept well last night and woke up a sweet girl this morning. She's definitely been a little more laid back today than in previous days. Still a little sleepy...she took a little nap this morning, but managed to stay awake for her therapies. Less of the squealing, more quiet...but still a little tense. She's been very "crunchy" the last couple of days. She's crunching forward a lot, with hands up in her hair...she's rolled up into a little ball! I'm hoping she settles down and has a nice relaxing weekend for us! In other news...way back in September when we visited the mitochodnrial doctor in Atlanta, she had recommended a couple of supplements to us that we had never tried with Reagan before. We've tried riboflavin and folic acid when Reagan was first diagnosed but we didn't really see an improvement, so we stopped them. She stayed on the L-carnitine and CoQ10 on the advice of her mito doctor although we didn't really see an improvement with those either (she stopped CoQ10 when she started on EPI-743). I wasn't really sure where to get these new supplements (no one tells you this) and so I procrastinated...until now. I just finally ordered them (from Swanson vitamins online). The first one was Alpha Lipoic Acid (200mg/day), a powerful antioxidant that aids in healthy glucose metabolism. Well, that's good. She definitely needs that. That is the one we have already started (I didn't want to start two new things at the same time...never a good idea). We started at 100mg and then after a week increased to 200mg. So far, we haven't noticed anything (good or bad), so we'll just continue to keep her on it for now. The other one that was recommended is L-arginine. This is just an amino acid, but apparently it is used to support immune function and help promote blood flow. This is also something I would think might benefit Reagan, especially considering her issues with temperature regulation. The interesting thing is, apparently L-arginine is commonly taken as a male enhancement pill...so when I ordered it online, I was surprised when our bottle arrived and read Advanced Erectile Formula!!! I had ordered the bottle that had the right doseage (3g), but apparently it also had some other things added to it as well. Needless to say, we won't be using that formulation on Reagan! So now I've ordered a pure form and we'll just wait til we get that to try L-arginine. 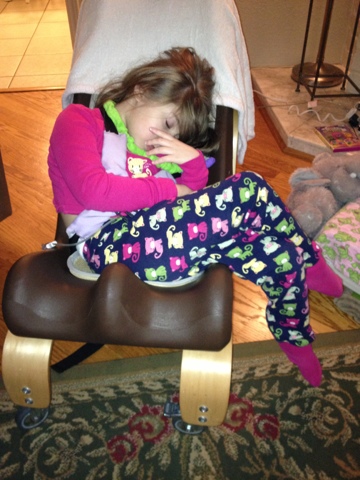