Reagan was asleep last night by midnight and slept through til 5:30am. I heard her moving around so I got up and made sure she was OK (and that she couldn't get to her hand) and then I laid back in bed. I woke up an hour later and she was asleep again. She woke up for good just before 8am and was all smiles. She had a wet diaper when I picked her up and she another shortly after. Definitely a good start to her day (wet diapers have been very hard to come by lately). She's been in good spirits all day today. Very sweet. A little groggy...she took two naps today which is out of character for her. When she woke up this morning she was still moving her tongue around a lot like yesterday but as the day went on she didn't do it as much. Not really gaggy at all, although she did almost choke on some spit (even though she hasn't been that spitty today). All in all, it's been a pretty good day. We could use some more days like this. Mike spent most of the day putting up Christmas lights on our house. It looks really pretty...not quite a Griswold Family Christmas...better I think. He managed to do it all without any major injuries although he did cut his finger and probably will be too sore to walk tomorrow. I'm about 3/4 finished with the tree but the house is a mess. We've got boxes everywhere and none of the inside decorations are really in place yet. That will be my job this week (in between doctors appts). We don't have anything scheduled for tomorrow though so maybe I'll be able to get organized...although it probably won't happen until my mom gets here later in the week. We've been in our house for over a year now and still have a spare bedroom/office that is filled with paperwork, boxes, extra furniture and pictures! Eventually we'll get to that...in our spare time...right? 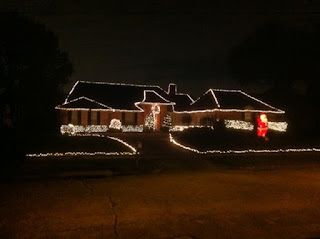 WOW! He did a great job on your lights! Impressive!

Yay for better days....hope she has many more of these! Hugs!!

Love to you all.