Reagan has been a handful today. Sleep last night was more interrupted than usual. And I think her on-the-edge mood is probably a result of all the seizures she's been having. Big ones. Little ones. Too many. She's actually doing a new twist on the spasm type seizures she normally has. She's adding a little tonic to the mix. So instead of her arms flying up and the whole thing lasting only a second or so, both arms will stiffen up for a few seconds and then she'll remain in a dazed and confused state for a little while. Sometimes it's only seconds and sometimes longer. These aren't the full blown tonic seizures she was having about a year ago...with those she remained completely stiff as a board for 1-2min and then very out of it afterward...they were horrible. But I don't like these new things either. I mentioned this to her neurologist today and he said they are called myo-tonics. Some kind of a combination of myoclonic and tonic seizures. He didn't really say much beyond that except that we should probably go up some more on her Clobazam. So that's the plan, tomorrow we'll increase her am dose so that she's getting 3/4pill 2x day. Hopefully we'll see some improvement with that (without the sleepy side effects). Please keep her in your prayers. Below is a picture I took of Mike and Reagan when we were in the process of moving out of our house. They were both so exhausted...it cracks me up! 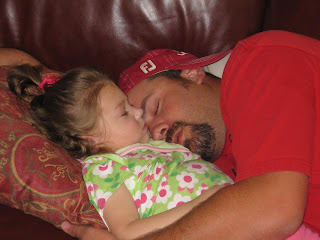 A girl and her Daddy.Nothing like it.So,so,so hate the new seizures!Call them whatever you like but I HATE that she is having them.Praying that the increase does the trick.Seriously,it just has to.Love to you all.

That sucks that she is now having a new seizure type. Hate to hear that...

Do the Doctors know what is causing her to have seizures? I am pretty new to following your story.

Sophie had those. They lasted anywhere between 5 to 10 seconds. Sometimes she would just have one and other times she would have four in a row that would completely wipe her out. Felbatol made them worse. Hopefully the increase in Clobazam will wipe them out.