Sleep is still good. Waking once a night...I'll take that any day over where we were. I think the Clobazam just allows her body to finally relax, resulting in more sleeping at night and during the day. And we're talking restful sleeping, you pick her up and she's limp as a noodle. I love that. I'm glad that she's finally getting that kind of sleep again because for a while she was such a light sleeper that anything would wake her up (especially seizures). Unfortunately, sleepiness does not work well with all of her therapies. She had three again today and was wiped out after each one. The perfect way to describe her is mellow. Clobazam is making her mellow. I spoke with her neurologist today about this and he suggested that instead of doubling the dose this weekend, maybe we should just increase the pm dose. Who knows, maybe we'll get a full night's sleep?!?! I'm still in favor of decreasing the Keppra (because I think it's contributing to the twitches) but he wants to go so slowly. We'll go down to 1ml 3x day tomorrow. I'm hoping this will result in less seizures. Please keep that in your prayers. I also spoke with the GI doctor today and she said the results of the upper GI we had done Tuesday all came back normal. The only thing they noted was mild reflux, which we already knew. So no real information from that test. Next step would be to go forward with the colonoscopy/endoscopy scheduled for July 28th. The her cataract surgery is scheduled for August 11th. We've got a lot happening in the next month or so. We're moving out (and packing...maybe I should get started on that) and then assuming everything goes smoothly we'll be moving into our new house. The sellers accepted our offer today and we've got an inspection already scheduled for tomorrow. If everything works out, we'll close by the end of the month. Talk about quick. Quick but not quick enough, we'll still have to put our stuff in storage and move in with my mom for at least a couple weeks. All of this moving is going to wreck havoc on Reagan's therapies, most of which will have to change because we're changing counties. That means a new PT, OT, and vision therapist! I guess that could turn out to be a good thing. Maybe a change of pace is what she needs. Maybe it's what we all need. 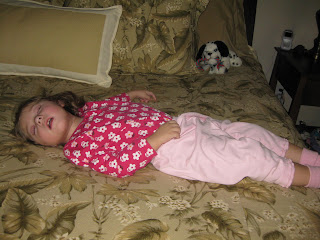 Congratulations on the new house. I hope the move goes as smoothly as possible.

Bless you guys, you just have so much going on at one time with the house stuff, therapys, seizures, and so forth. How do you cram all that in one day??

Soooooooo glad to hear Reagan is sleeping like she is. We know about those sleepless nights and they really make dealing with all that stuff almost intolerable at times.

Give Reagan an Alabama squeeze for us ok